ESPROS Photonics AG recently presented its ‘ESPROS Innovation Award’ to the graduate with the best thesis in the Photonics degree program. The recipient was David Zbinden of the Graubünden University of Applied Sciences. 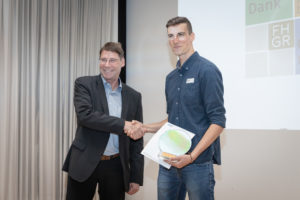 The Bachelor in Photonics is a unique course of studies accredited in 2013, which in Switzerland can only be completed at the Graubünden University of Applied Sciences in Chur. Now, six years later, its first graduates recently received their degrees. The course is supported by over 20 Photonics companies, the majority located in the Rhine Valley of cantons Graubünden and St.Gallen. ‘I’m absolutely delighted with the final theses of the first class of Bachelor students in the new degree course in Photonics at the Graubünden University of Applied Sciences,’ stated Beat De Coi in his remarks at the presentation. ‘As a business hub it is of the utmost importance for the canton of Graubünden, to be able to offer high-tech studies which act as a magnet far beyond the region’s boundaries. «Photonics» is one such course of studies.’ he continued.In order to support and promote Photonics as an academic education and to draw attention to the importance of this technology, ESPROS Photonics established the «ESPROS Innovation Award».

We use cookies to track usage and preferences.OkRead more